Once you pop, we can’t stop…..scraping

Once upon a time there was a girl who bought a 1648 sq. foot house. Every ceiling in this house had that famous popcorn texture that we all know and love. Every. Single. Inch. It’s even on the ceilings of the closets! This same girl thought she would be able to scrape this popcorn texture from these ceilings and it was no big deal. Boy, was she wrong. 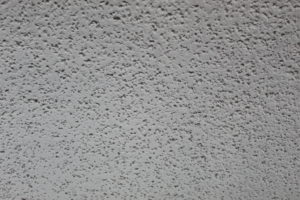 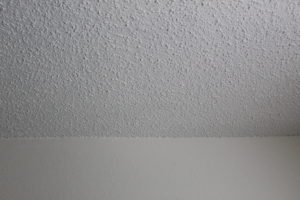 Here’s how all the ceilings looked before we started scraping. We have told several of our new neighbors about our project and how we are going to start scraping and their reactions have been pretty funny. We have heard things like, “yuck,” and “what a mess.” We soon found out that those are just a few of the ways you could describe this job…among other, less blog-appropriate words.

The process itself is simple. First, spray the area you plan on scraping with water and let it soak so it saturates the surface. We found that magic number was around 15 minutes but it definitely didn’t hurt anything to let it soak for longer stretches of time. While it soaked, we used this time to prep for the mess. Although, I’m not sure there is any amount of prepping that a human being can do to prepare for the mess that is about to ensue. Then, the scraping begins…and never ends. Okay, it does end at some point. We just haven’t found that point yet. 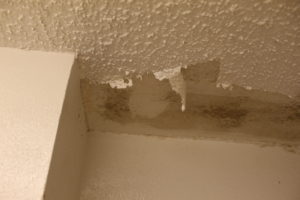 Lovely, isn’t it? It was a little shocking to see the drywall for the first time all dark and soaking wet. But, it quickly dries and looks lighter and more like drywall is supposed to look. 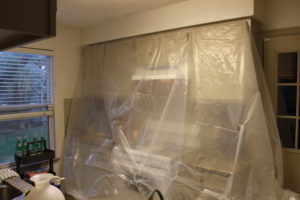 The plastic tarp was a life saver for us as the dust that comes with this job is very fine and goes just about everywhere. Your hair, your ears, and even manages to make its way through your clothes. In the kitchen, I was able to tuck the plastic right under the doors of the cabinets. Originally, I was going to use painters tape to secure it to the top of the cabinets but when I went in the the garage to find the tape, I was greeted by a very large wasp. Nate wasn’t due home from work for another 45 minutes so I decided I would work with what I had and tuck that plastic right under the doors. It worked like a charm.

Preparation is really the key to this job. We quickly learned that the more you prep – the less time you spend cleaning up. A shop vac would have been very helpful. We don’t have one but would definitely buy one if we were doing it over because our regular vacuum for the house isn’t speaking to us anymore after all this extra work we have put it through. 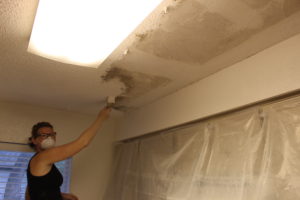 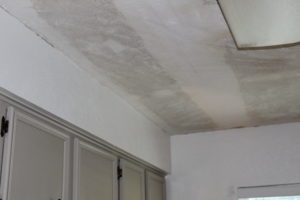 That fluorescent light used to live in the kitchen but we took it down so we could scrape under it. It definitely won’t be returning. I am going to start hunting for a flush mount fixture for the kitchen. This was sort of a theme as we finished each room. I had Nate take down the light fixtures for scraping ease but am thinking that none of them should go back up so we can take this opportunity to replace them with something more our style. Either that, or we will be living in the dark. 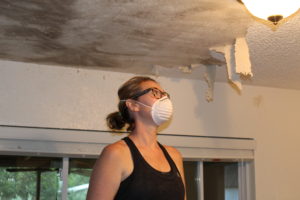 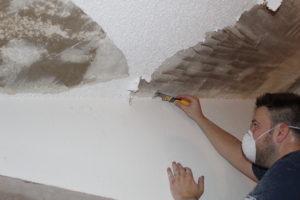 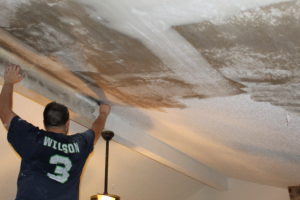 Nate was a good sport and climbed all the way to the top of the vaulted ceilings for me because I was too scared to get up there. 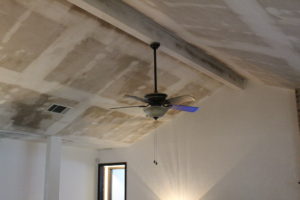 After the long weekend of scraping, we finished up the kitchen, dining and living rooms, entryway, hallways and one bedroom. We have three bedrooms with their closets and the bathrooms to go…and we will finish it! Next up, figure out how we are going to get these naked ceilings textured and painted.