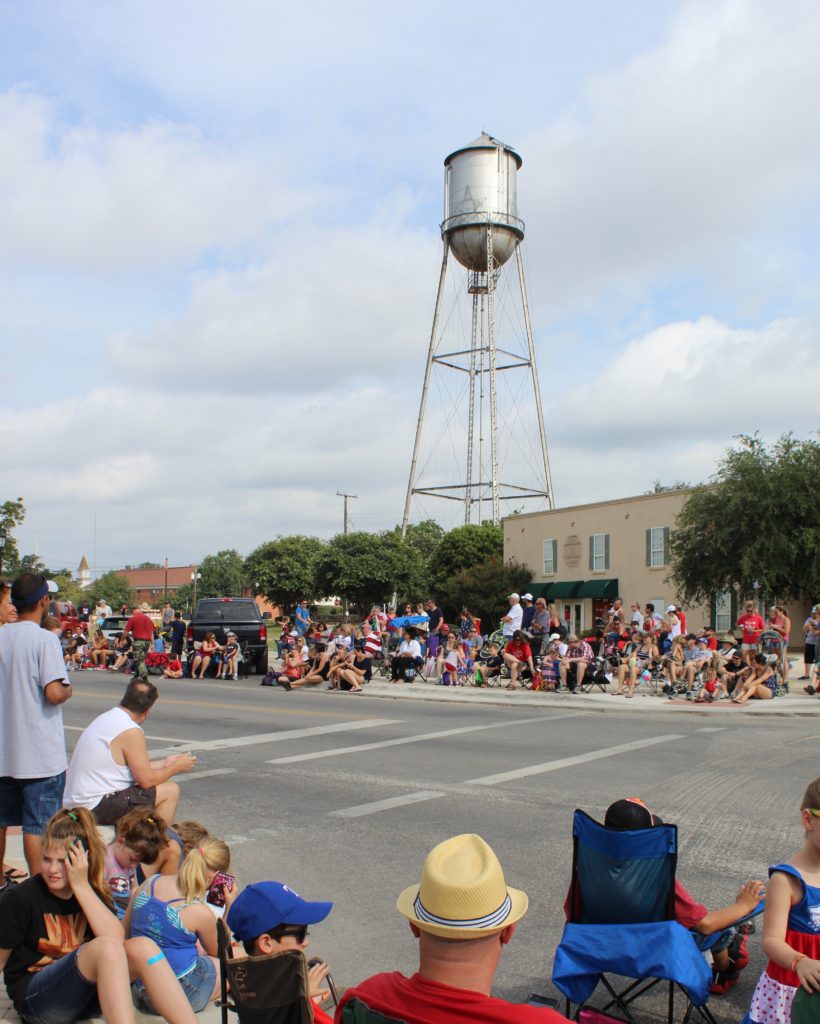 Whew! This weekend we celebrated the 4th of July and attended a parade, a fireworks show and two different BBQ’s. It was kind of a whirlwind but we all had fun. The parade was one of the best I have seen and shouldn’t have been surprised that Texans know how to do a parade right. The kiddos scored major in the candy department and we all nearly died in the almost 100 degree heat. 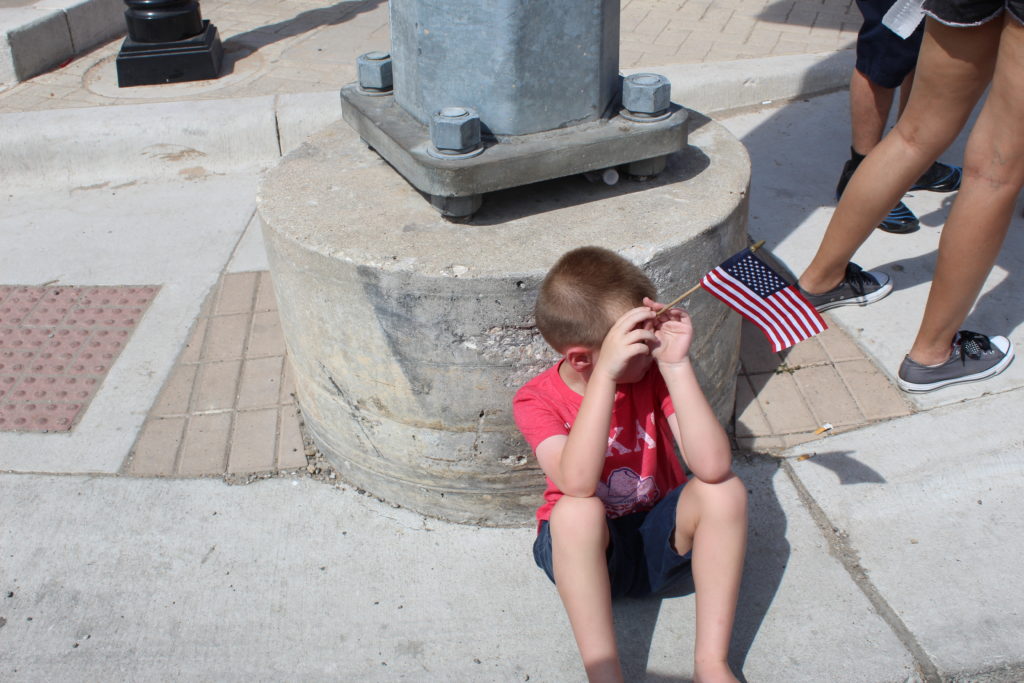 In between all of the festivities over the weekend, we were able to get a project done at home. Yes! Am I talking about our ceilings that still need texture and paint? No! I swear though, it is happening this weekend. Seriously.

I think I mentioned previously that I was going to try my hand at white washing the brick fireplace. I have been looking at tons of inspo pics of white washed brick and I love the way it looks. My favorite thing about white washing is how it leaves the differences in the individual bricks behind and doesn’t completely cover them in an opaque finish the way a latex paint would. So the overall impression is a much less polished look which I think is appropriate for brick because it’s not meant to be perfect. Here is our fireplace. 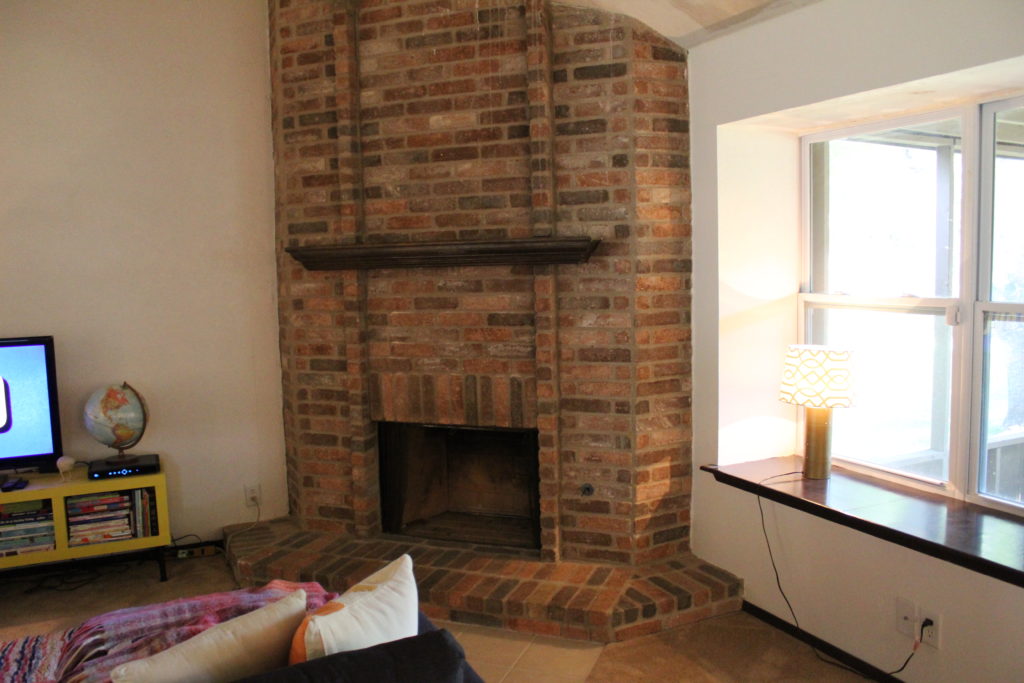 Usually, I love unpainted brick because I am always partial to rustic finishes, but this particular brick was related to the brick that was used on the outside of the house and most definitely had some pink undertones. Pink brick = not a good look. So, let the white washing begin already! 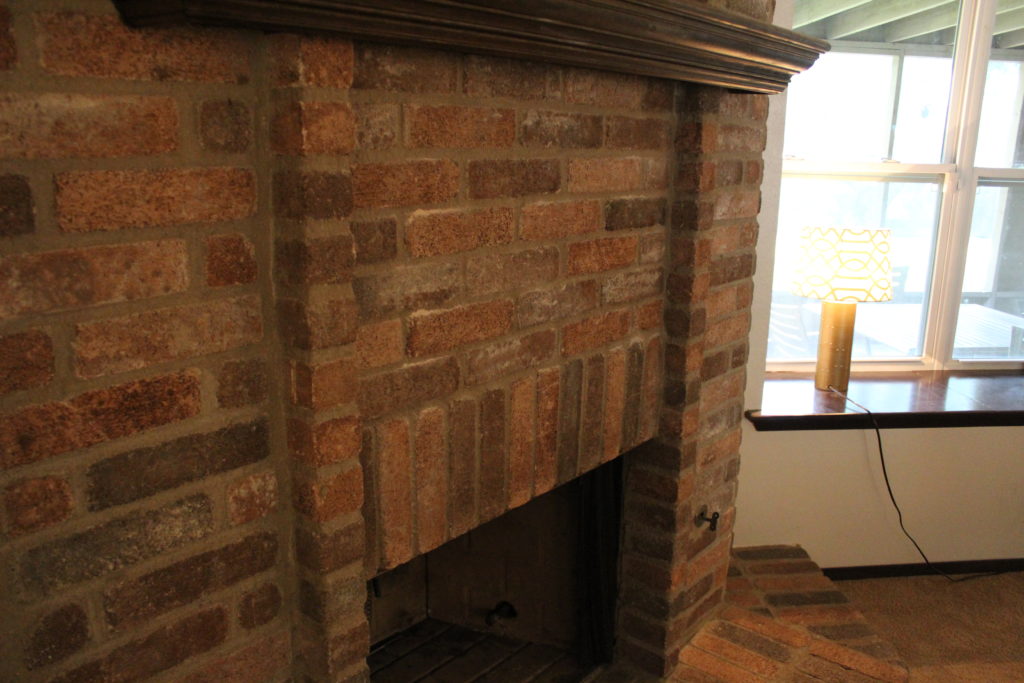 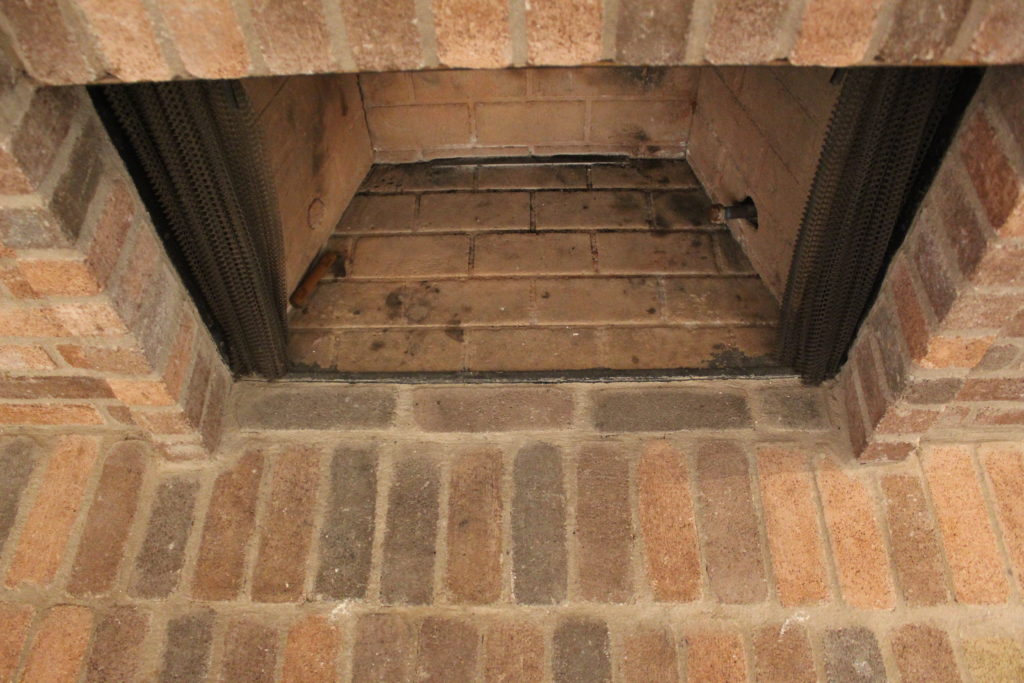 In addition to white washing the brick, I knew the existing mantel needed to be altered. Some ideas included starting a fire in our fireplace, ripping it off with sledge hammers and throwing the mantel in the fire. But, instead of going down this road, I found some pictures online of some simple chunky mantels that people built themselves. I showed these pictures to Nate and asked him if he thought he could do the same. After quite the pep talk, he reluctantly agreed and was nice enough to give it a try to see what he could come up with. 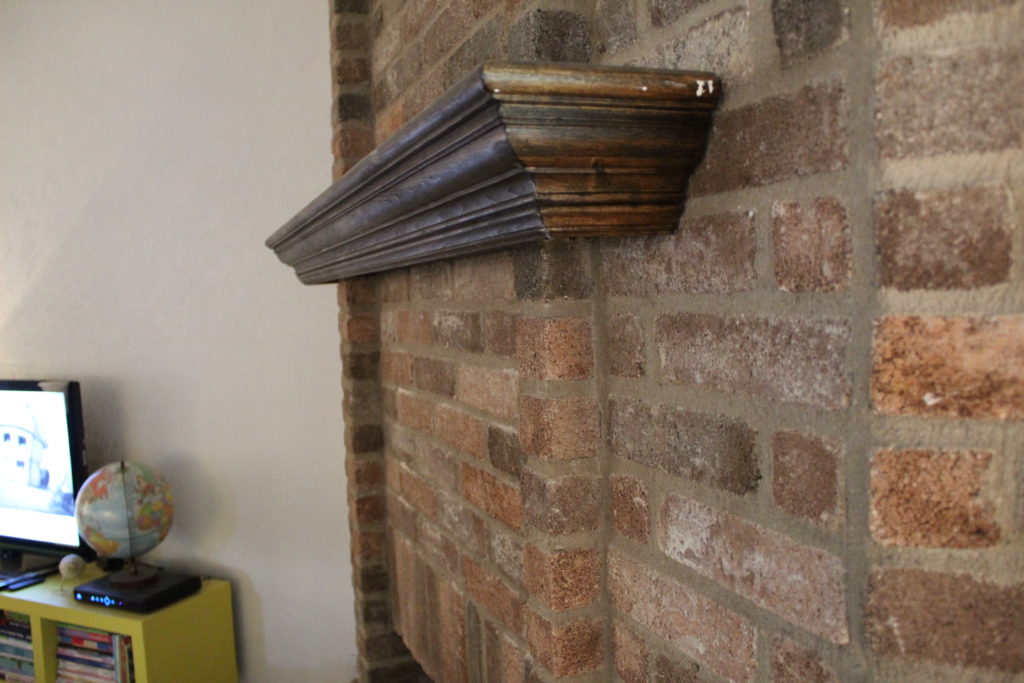 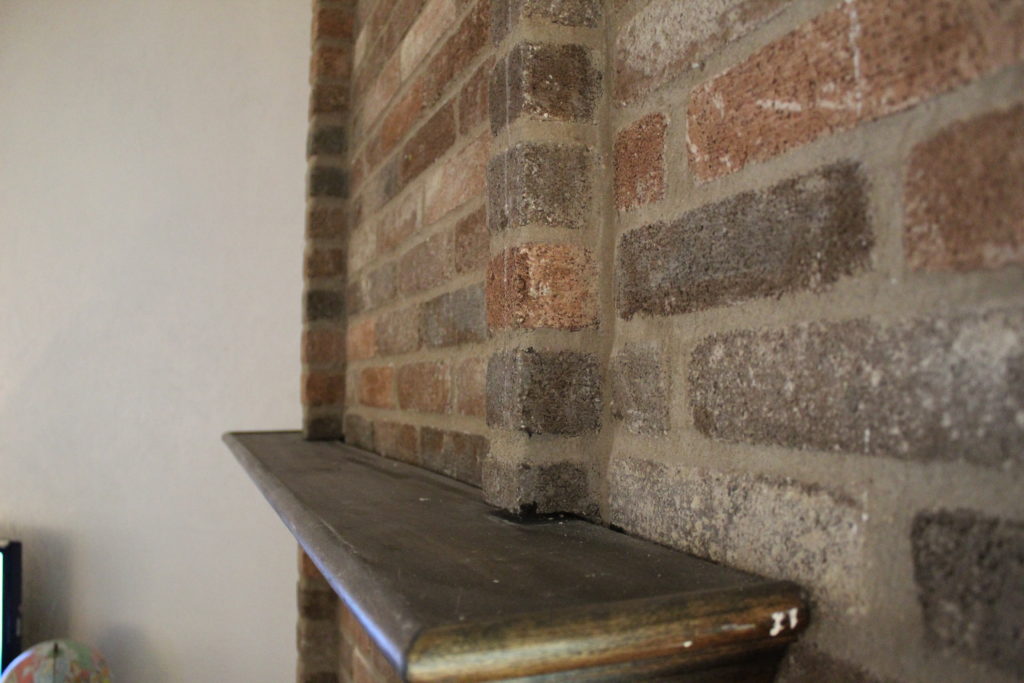 The white washing part of the project was FUN! I already had some white, flat paint and just mixed equal parts water and paint and painted it on with a brush. It went much faster than traditional painting and the bricks do all the work for you. After you apply the wash, the bricks soak up the water and paint that leaves the uneven, white washed effect. 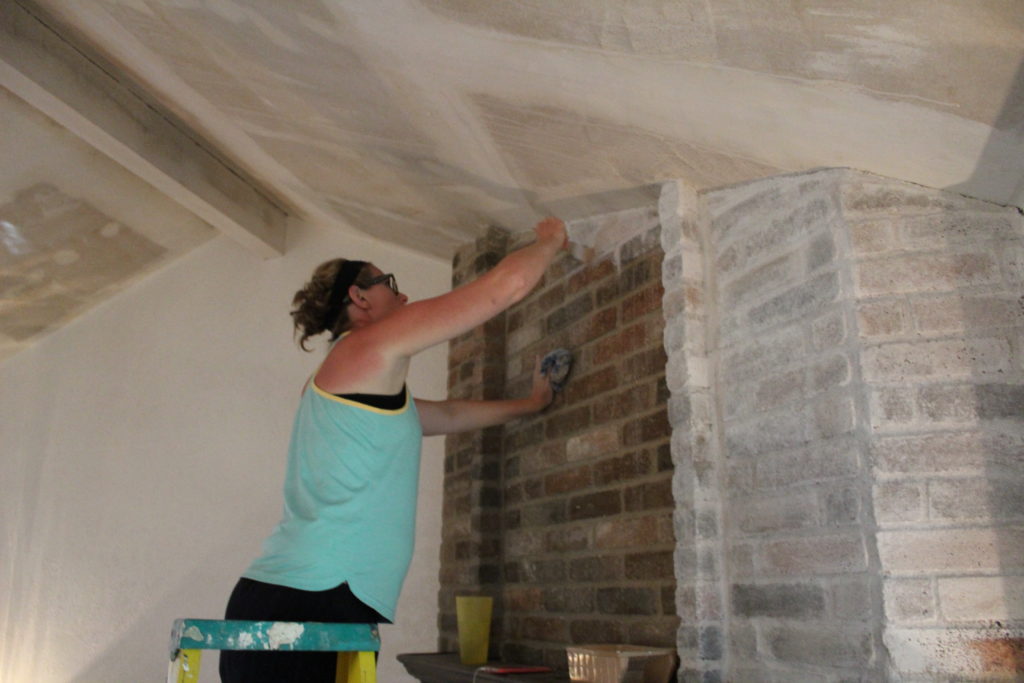 Please ignore my sun burnt arms, I went outside for three minutes and only used a sun block with spf 1000. Also, please ignore our ceilings. Seriously, we are going to get them done this weekend.

After Nate had taken down the old mantel, only the supports were left. Nolan and I decided that it would be fun to write a message in a bottle and hide in the frame before Nate attached the new mantel. We had so much fun dreaming up scenarios where/when someone would find our letter. Her ideas were too cute. 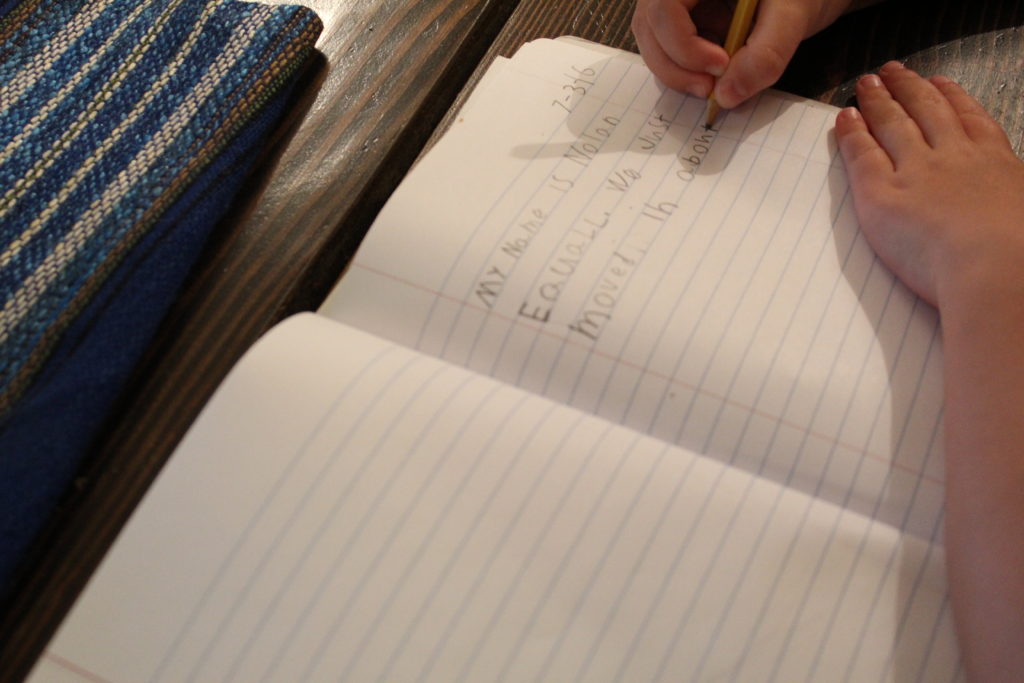 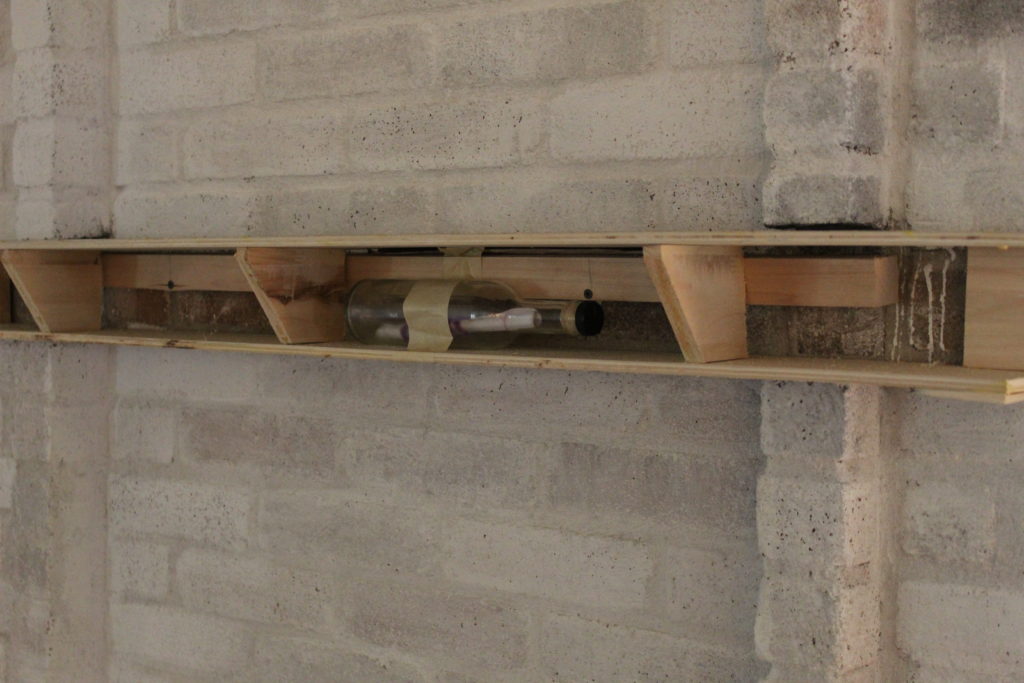 After our letter was hidden away, there were a few, last minute jobs that needed to be done in order to check this project off our list. There were some very visible cracks that became even more visible once the bricks were white washed. It was a pretty simple task but I had to mix some mortar cement and patch all the gaps and cracks. We also used some black, high-heat spray paint and sprayed the inside of the fireplace so the brick inside looked new again with a fresh coat of black paint. And, finally, Nate finished the mantel and attached it to the existing frame. I am so proud of him. Not too shabby for his first try at building something, right? 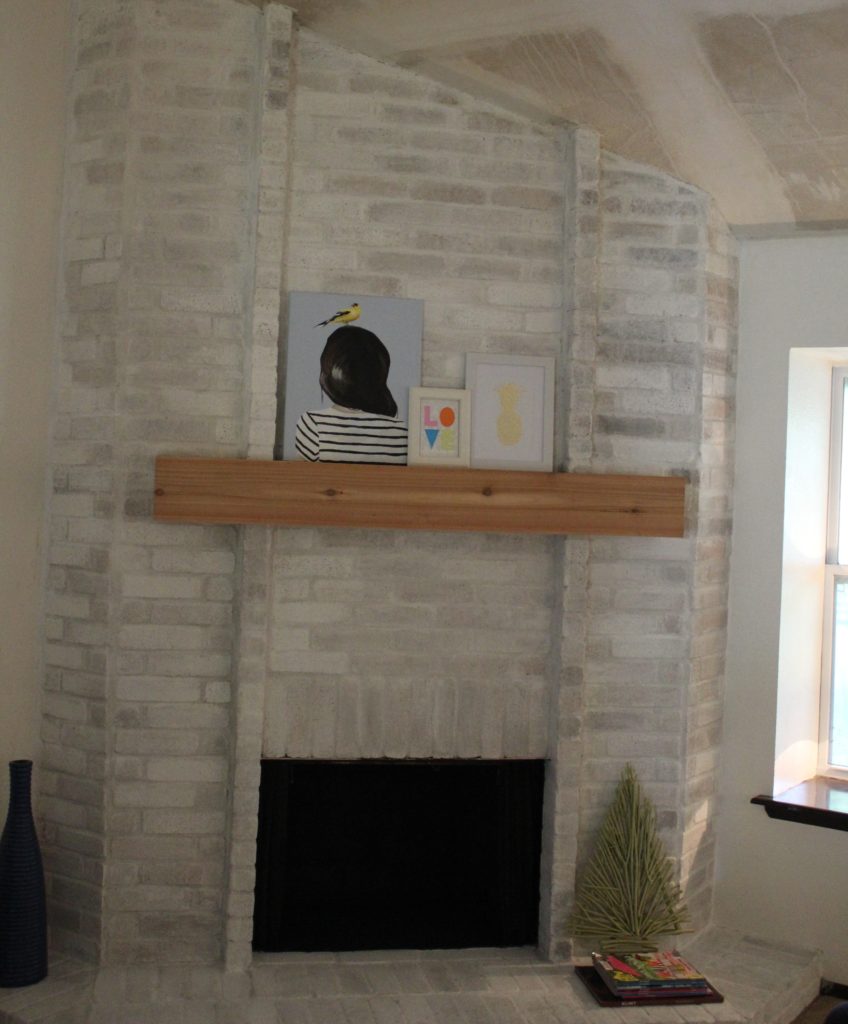 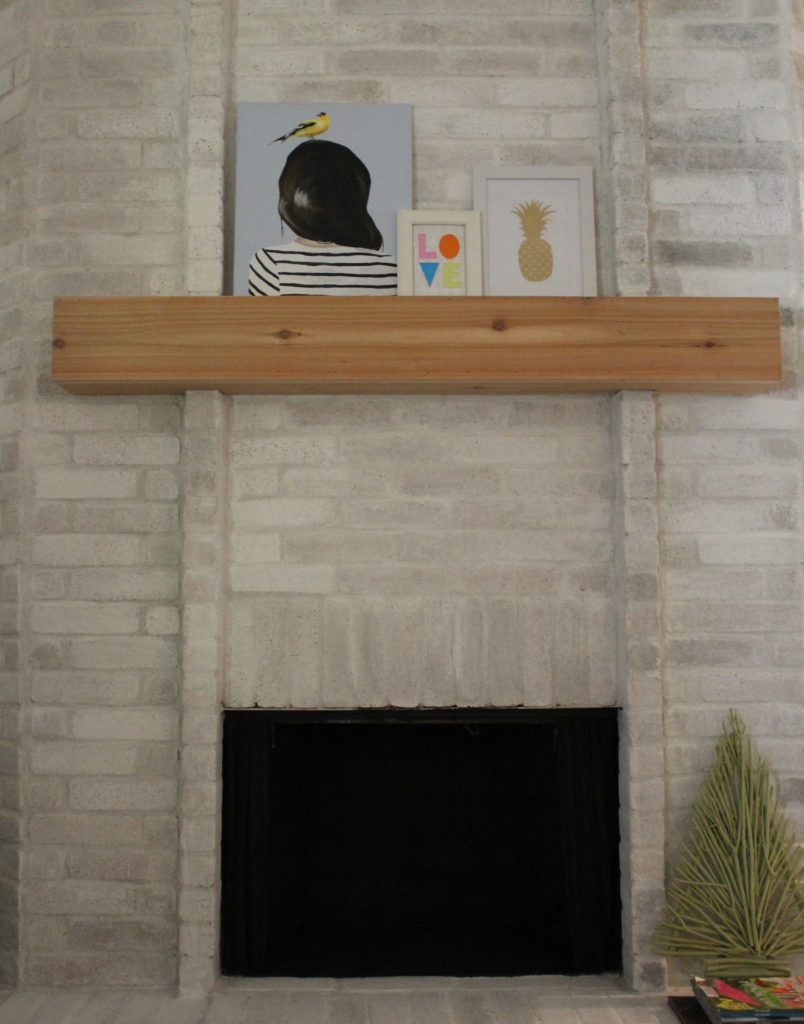 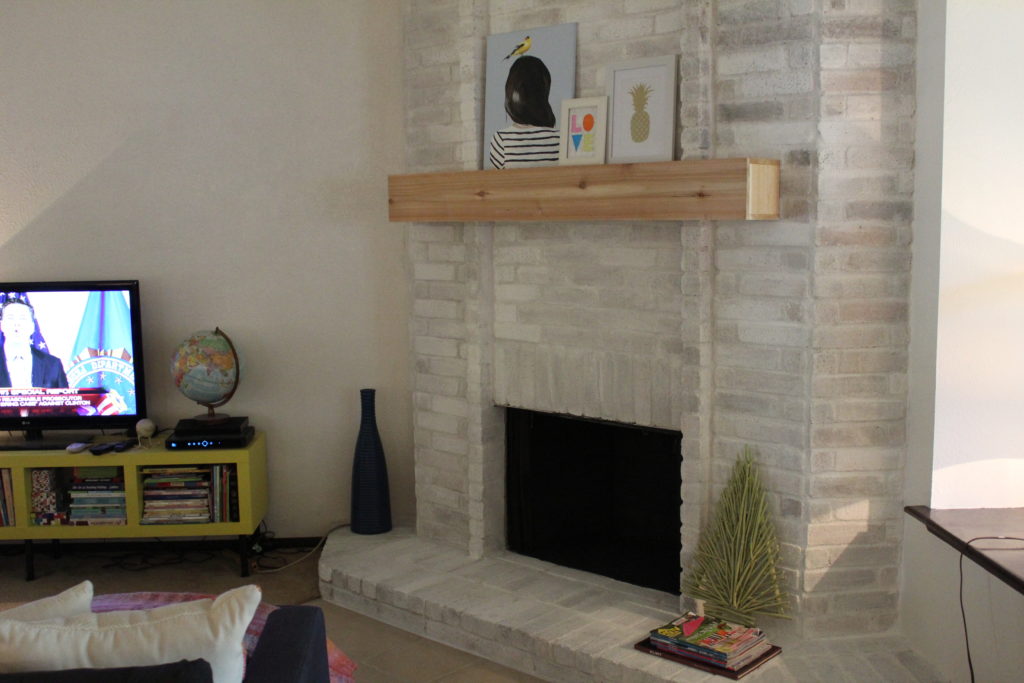 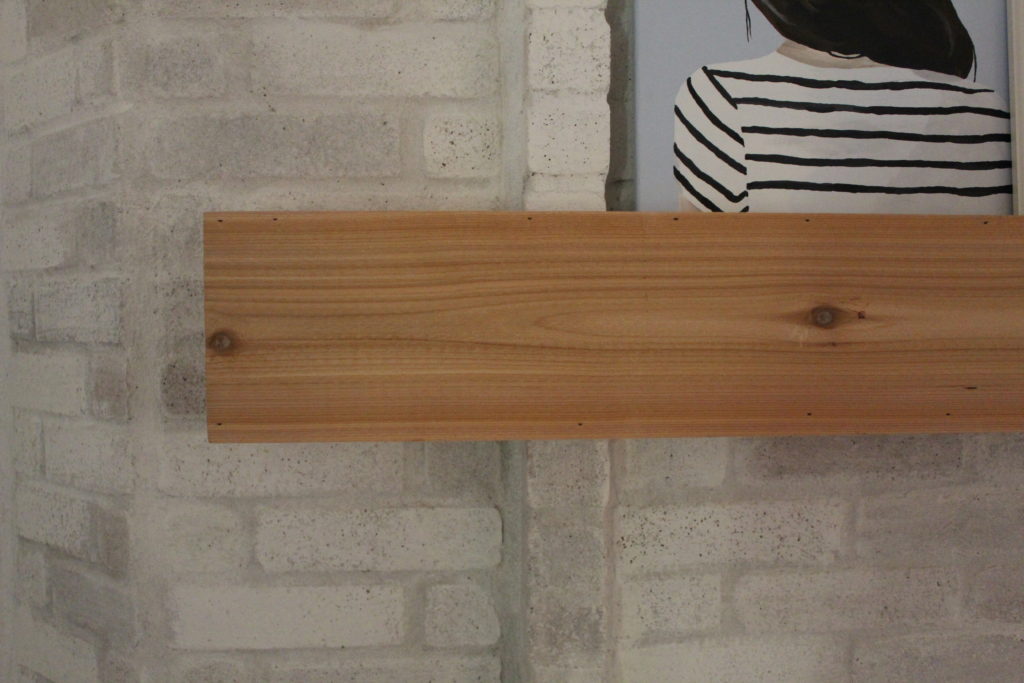 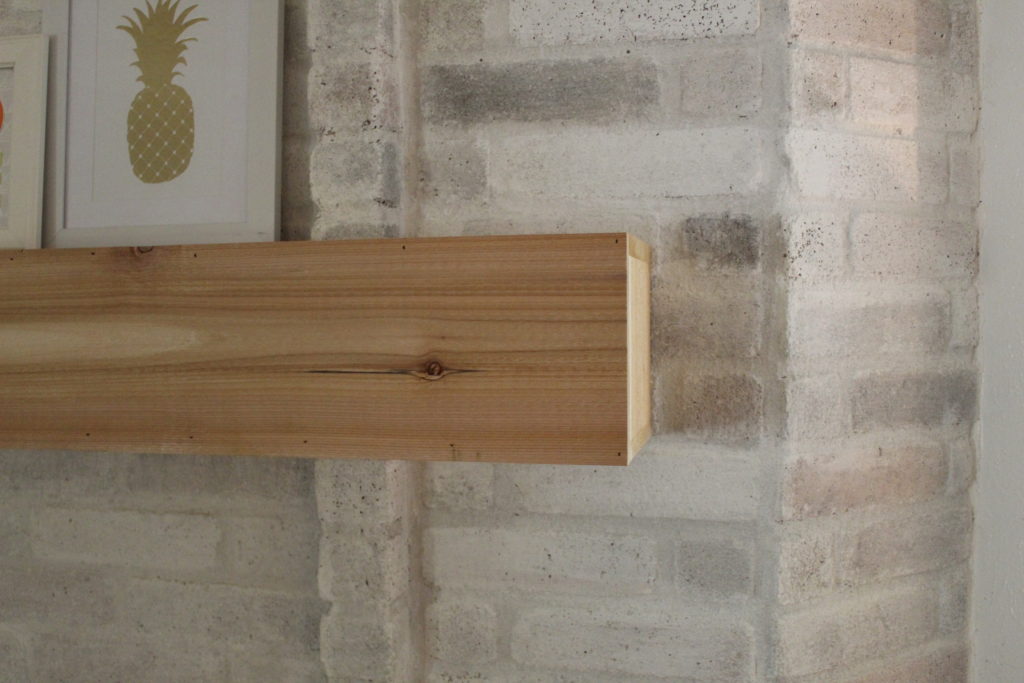 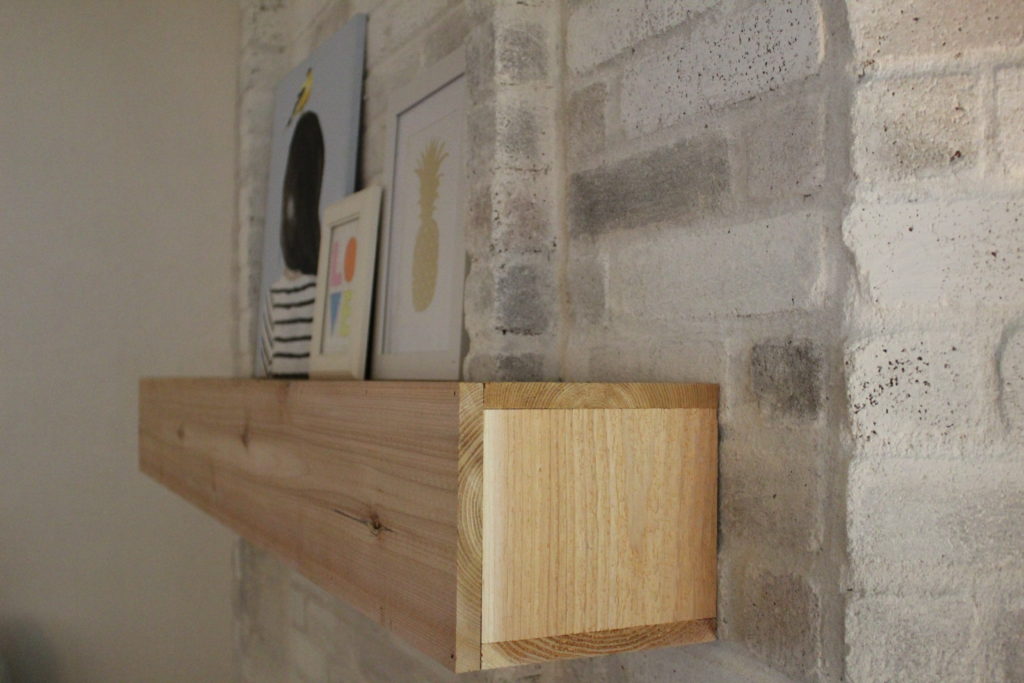 He made the mantel out of cedar planks and I haven’t decided if I should seal and/or stain it. This was a really fun project and being able to include Nate and Nolan made it even more fun. And because I already had the paint for the white washing, the grand total for lumber, mortar mix and a can of spray paint only made a $32 dent in our pockets. Big impact for a small amount of cash! Everybody wins.